But feedback about the CONTENT and academic STYLE is more difficult, especially if you are not familiar with the demands of academic writing.

Here is a ‘glossary of terms’ that I use regularly in my IELTS Writing Feedback Sessions in the Members Academy to help them improve their Writing Task 2 essays.

Listen to the podcast version of this lesson:

appropriate – e.g. giving ‘appropriate examples’. This means that your writing or examples are suitable and well-chosen. An ‘appropriate tone’ is the right tone (academic, formal) to use for a Task 2 essay.

authoritative – displaying confidence; showing that your opinions deserve respect because they are accurate, true, reliable and trustworthy. If your ‘voice’ has ‘authority’ it commands respect.

balanced – showing both sides of the issue and in fairly equal proportions. Also: objective and unbiased.

clear (noun clarity) – clarity (being clear, easy to understand and easy to follow) is much more important than complexity (being complex). Many students try to make their writing more complex, but it is better to spend time making your writing clear.

coherent and cohesive – these two terms are Task 2 Band Descriptors. A coherent argument is logical and consistent. If your essay is coherent, it is clear and carefully considered, and each part of it connects in a natural way.

complex (noun: complexity) Your writing does not need to be complex to be clear. You can explain complex ideas in simple ways. But when you force yourself to use complex language your writing may be confusing for the reader.

concise – expressing what needs to be said without unnecessary words; giving a lot of information with few words. (opposite: wordy)

critical (verb to criticise) – this does NOT have a negative meaning in academic writing. Being critical means that you evaluate, assess, examine and judge the issue carefully, skilfully and thoughtfully. (see critical thinking below)

defensible (from the verb to defend) – you must be able to defend (justify, support) your arguments, especially when your arguments could easily be criticised. (Opposite indefensible).

impersonal – academic language needs an ‘objective, impersonal’ tone. This means that you should avoid characteristics of personal language. It is ok to use ‘I’ in IELTS Writing (I believe, I would argue that, In my opinion). You can also avoid using ‘I’ or other personal pronouns by using other structures such as ‘This essay will show’ or passive voice ‘It is often argued’.

logical (opposite illogical, noun form ‘logic‘) – a logical argument is one that is based on reason and good judgment. A logical link is a connection between two things that makes sense. A logical outcome/ conclusion/ solution is the most sensible or reasonable one, judging by what you already know.

objective (opposite subjective) – if you are objective in your judgment, you are not influenced by personal feelings or opinions in considering and representing facts. Synonyms: impersonal, impartial, unemotional.

persuasive: you need to be able to persuade the reader to believe in your arguments through reasoning and strong examples that illustrate and support your points. Similar words: convincing, effective, compelling, powerful.

precise (noun precision) It is better to give specific examples than to generalise. Choosing exactly the right words (being precise) is also very important. Avoid being vague and imprecise (e.g. don’t use words like ‘good’ or ‘great’).

redundant (noun redundancy) – avoid the unnecessary use of more than one word or a phrase meaning the same thing e.g. It is often thought by many people that…, (Globally), there are many countries (all over the world).

relevant (noun relevance, opposite irrelevant) Your examples need to be relevant to the question i.e. closely related to the question or issue being discussed. Don’t go off topic.

supported (noun support) your claims and points need to be supported with examples, evidence or explanations so that they have more validity, and are more persuasive because they are backed up (synonym).

valid (noun validity): your arguments need to have a sound (well-founded, rational, credible, believable) basis in logic or fact.

anecdotal – anecdotal information is not based on facts or careful study. It is based on things that you saw or heard rather than on proven facts. Academic language is scientific and needs to be based on facts.

confusing – this is when your arguments or logic don’t make sense and the reader is confused by them. This could also be due to over-complex language.

emotional/emotive – expressing your feelings rather than being neutrally descriptive. You should avoid using any emotional language or language that is meant to cause an emotional reaction e.g wonderful, magical, terrible, amazing.

exaggerated – don’t represent something as being larger, better or worse than it is in reality. Exaggeration (synonym hyperbole) loses trust.

‘flowery‘ – this is a word I use in feedback to describe non-academic words, expressions and thoughts e.g. ‘Children are a wonderful blessing from God’.

general/generalised – see the point above about being specific. Avoid sweeping generalisations and stereotypes e.g. ‘Most women prefer to look after children’. BUT when you’re giving examples, it’s better to talk about general trends than personal, anecdotal examples. e.g. ‘Women have traditionally taken the role of housekeeper’ is better than ‘All the women I know stay home and look after the children’.

mechanical – following a fixed template or pattern without thinking about what you’re doing or saying, like a robot. Avoid using linking words mechanically e.g. don’t put words like ‘Moreover’ ‘Besides’ ‘Therefore’ at the start of each sentence. Use other forms of cohesion.

memorised – All language is memorised, but examiners can see if you have memorised whole paragraphs and therefore not using your own language. However, it is perfectly acceptable (and recommended) to use memorised ‘chunks’ of language such as collocations e.g. ‘This has had an adverse effect on …’

rambling – long and confusing/confused, tending to digress (depart from the main point), or cover a wide range of subjects. Lacking in focus and structure. illogical, incoherent.

repetitive (noun repetition) – saying the same thing in different ways but not developing your points. Or using the same word/idea/argument too often.

subjective (opposite of objective) – if your views are subjective, they are influenced by your personal feelings, experiences or beliefs rather than looking at the issue from a more neutral, unbiased, factual position.

vague – the opposite of precise and specific. Unfocused and imprecise language or examples make your message unclear, unreliable, or unconvincing. You need to clearly state, express or describe your point of view and be precise in your choice of examples.

collocation – learning ‘chunks’ of language (short phrases) will reduce the burden of trying to find the right word or expression in the Writing Test. Examples include ‘have a detrimental effect on’ or ‘tackle a problem’.

concession – In order to discuss an issue in a balanced way, you may need to concede (admit or agree that something is true even though it doesn’t support your argument).

convention – different countries and cultures have different writing conventions (ways of writing that are considered usual and correct and that are widely accepted and followed). The convention that you have been taught at school may be different from what is expected in the IELTS test, so you need to become familiar with IELTS-writing conventions by reading models from trustworthy (reliable) sources.

essay types – there is a lot of information online about what ‘type’ of essay you should write (‘argument’ ‘opinion’ ‘discursive’ ‘expository’ ‘persuasive’ ‘analytical’ ’cause and effect’ ‘problem and solution’ ‘advantages and disadvantages’ ‘process’ ‘synthesis’ ‘theory-evidence’ etc). Although there are different types of questions, I argue that there is only ONE type of essay for IELTS, and I call it an OPINION essay. This simply means an essay where you discuss the issue in a balanced way, and give your opinion. Pauline Cullen calls this a ‘DISCURSIVE’ essay.

extent – ‘To what extent do you agree?’ This question is simply asking you to discuss the issue and give your opinion, like any other Task 2 question.

functions – every sentence in your essay has a function e.g. to explain, to exemplify (give an example), to criticise, to show the other point of view, to predict, to contradict, to refute, to show concession etc). You have to be clear about the function of each sentence, and use the appropriate language to express that function as well as the correct linking word to introduce it (e.g. if, therefore, which means that, namely).

hedging – in order to avoid stereotypes and generalisations, it is really important that you learn how hedging works and how to hedge (use more cautious language).

stance (standpoint) a particular way of thinking about something (synonym opinion, position). Where do you stand on this topic? (‘what is your stance?’ = ‘To what extent do you agree or disagree?’). You need to make your stance clear and present a clear position, even if they ask you to show both sides. You MUST say which side you favour. Make sure you show this in the introduction so that your ‘position is clear throughout’ (Band 7).

message – your message is like your stance, viewpoint or opinion. It needs to be easy to follow. The examiner should not have to read carefully to find your message hidden somewhere within a paragraph.

PEEL paragraphs – ‘PEEL’ stands for Point-Explanation-Example-Link, and this structure ensures that you make your point clearly, explain it, support it with evidence and then link back to the question (I call this final Link the ‘So what’? sentence – it helps you remind the reader why your point is relevant to the question).

templates essays – template Task 2 essays are essay outlines that you can adapt depending on the question. When you’re preparing for IELTS, these can be useful if you use them as models to help you learn about paragraph structures, but you should never memorise them or try to use them in the test. Your essay will look and sound very unnatural if you simply use a template and change certain words according to the question.

thesis statement – when you’re writing a dissertation at university, you have to summarise your argument in a ‘thesis statement‘ in the introduction to show the reader what you will argue or try to prove in your essay and how you will do this (like a road map). In IELTS essays, where you are limited to around 250-280 words, you do not need to give a thesis statement. However you need to write your opinion clearly in the introduction. So I DO recommend that you write a thesis statement such as ‘In this essay I will argue….’ or ‘This essay will argue in favour/against…’. OR simply by saying ‘I agree/disagree with (the issue) and I will outline my reasons below’.

Click on this ‘flippity.net‘ link for audio and more practice.

Do you need IELTS Writing Feedback?

Have you been preparing for IELTS the hard way? Reading all the information but not seeing any transformation?

Join the Members Academy to get everything you need to improve your Writing score – all lessons, materials, feedback and more. 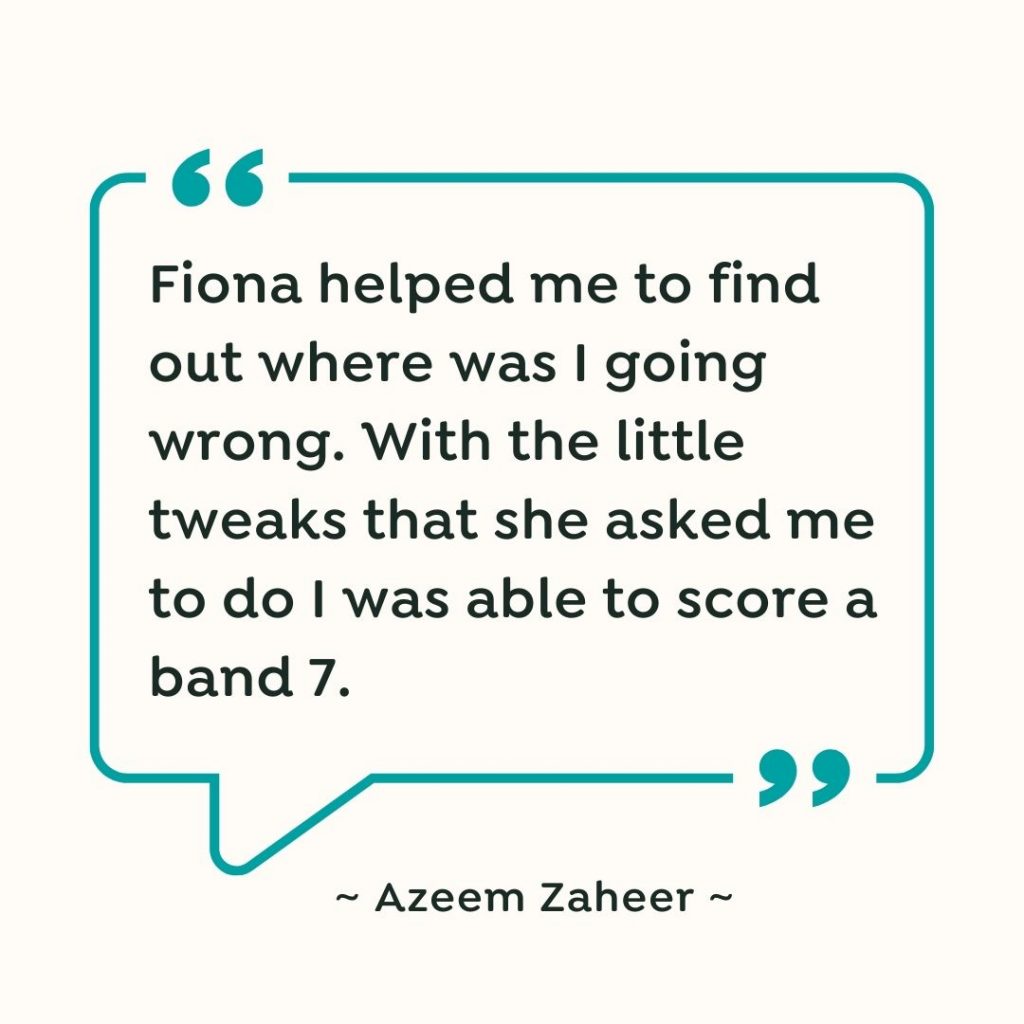