You are here: Home / Reading / True/False/Not Given Questions 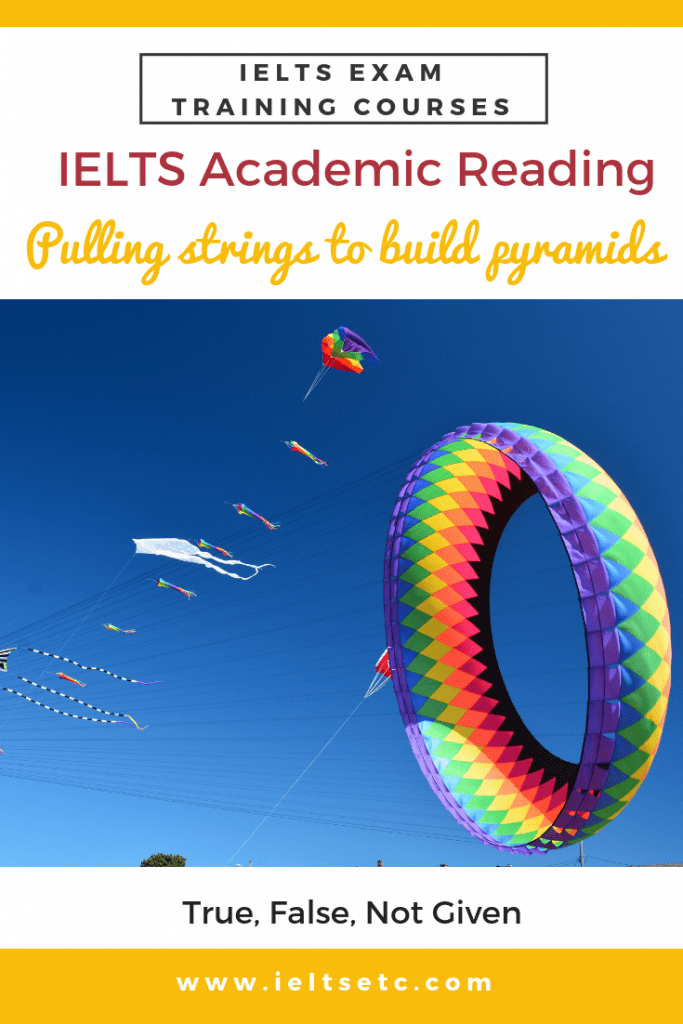 Follow some of my basic strategies to help you understand the way these questions work.

Let’s start with the basics.

Not Given = The text does not say if the statement is True or False (in real life, it could be true OR false, but there is no answer in the text)

Read this paragraph from a text about how the pyramids were built:

The pyramids of Egypt were built more than three thousand years ago, and no one knows how. The conventional picture is that tens of thousands of slaves dragged stones on sledges. But there is no evidence to back this up.

1 It is generally believed that large numbers of people were needed to build the pyramids.

Underline the synonyms (similar words or words with the same meaning):

It is generally believed  = The conventional picture

large numbers of people = tens of thousands of slaves

So is the statement True or False?

Correct answer: TRUE (the statement has exactly the same meaning as the text).

Now a Californian software consultant called Maureen Clemmons has suggested that kites might have been involved. While perusing a book on the monuments of Egypt, she noticed a hieroglyph that showed a row of men standing in odd postures.

2 Clemmons found a strange hieroglyph on the wall of an Egyptian monument.

So is Statement 2 True or False?

The sentence in the text contradicts (says the opposite of) Statement 2:

So of course the answer is FALSE.

***If you want to check if the answer is NOT GIVEN, turn the statement into a question:

Did Clemmons find the hieroglyph on the wall of an Egyptian monument?

Where did Clemmons find the hieroglyph? Was it on the wall of an Egyptian monument?

The answer is in the text – she found the hieroglyph in a BOOK. So the answer is GIVEN, but the statement is not correct. So it is FALSE.

Look at the next paragraph of the text (remember that the statements/questions will go in the same order as the information in the text):

Intrigued, Clemmons contacted Morteza Gharib, aeronautics professor at the California Institute of Technology. He was fascinated by the idea. ‘Coming from Iran, I have a keen interest in Middle Eastern science’ he says. He too was puzzled by the picture that had sparked Clemmons’s interest.

Ask yourself the question. Did Gahrib do experiments on bird flight before he met Clemmons?

Maybe he did. Maybe he didn’t. We don’t know, so the answer is NOT GIVEN.

Most Reading Texts have T/F/NG questions and I have plenty of True/False/Not Given practice on the website and on my podcast.

Click here to read the texts, do some practice and get explanations if you’re not sure.