You are here: Home / Writing Task 2 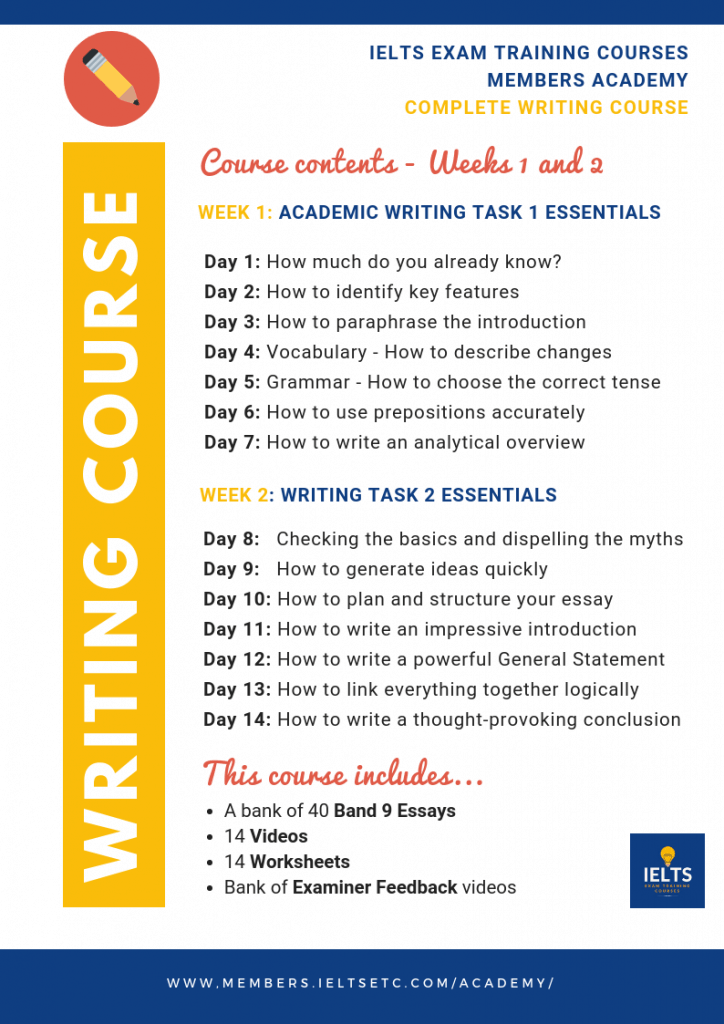 You also need to show that you have

How do I answer the question?

There is no correct answer to a Task 2 question. You can answer the question in many different ways, and they could all achieve a high score.

But there are some things that you can do to get the highest score possible.

The main thing is to answer the question very closely and specifically.

How much do I need to write?

It is very important that you write 250 words minimum but don’t be afraid to go over the word limit, especially if you’re aiming for a Band 7 or above.

Make sure that you leave a full 40 minutes for Task 2, as it is worth more.

Some people like to do Task 2 before Task 1 – this is up to you, but personally I would prefer to get Task 1 ‘out of the way’ so that I can fully concentrate on Task 2.

How formal should my language be?

The IELTS exam tests your ability to write Academic English – the kind of English you need at University, so it has to be formal. This means:

Can I memorise an essay and change some words to suit the topic?

It is better to avoid using large chunks of language that you have memorised because these types of sentences are often empty and meaningless e.g.

(48 words which say almost nothing!)

Also, examiners can easily see if you are using language that you have memorised and will give you a low mark for this.

How should I structure my answer?

The main types of  Task 2 questions are:

So it is easy to plan and structure your essay into 4 clear paragraphs like this:

Thesis statement (what you think, and what you will argue)

Problems/advantages/causes/reasons to agree/ arguments for

Solutions/disadvantages/effects/reasons to disagree/ arguments against

A summary of main ideas and opinion. Finish with a final thought such as a recommendation or a consequence.

Look at the Task 2 Writing question below:

In some countries the average weight of people is increasing and their levels of health and fitness are decreasing.

What do you think are the causes of these problems and what measures could be taken to solve them?

General Statement – give the background to the question e.g. Is this a recent development? Tell the reader what you will argue.

What are the causes?

What measures could be taken to solve them?

Summarise your main idea – What/Who is to blame? What can we do about it? And leave the reader with a thought e.g. Is the government doing enough?

Despite a number of campaigns encouraging people to eat more healthily and to do more exercise, little progress has been made in dealing with the problem of obesity and declining levels of fitness. This essay will describe how this situation has come about and argue that the government needs to take action and implement more drastic measures to address this issue.

There are many reasons why obesity has increased dramatically in recent decades. Developments in technology have led to an increase in sedentary jobs, and higher levels of income mean that people can afford to drive everywhere rather than walk and to buy processed ready-meals rather than cook. In addition, children these days spend far too much time on their screens instead of running around outside. The result is a disaster waiting to happen.

In my opinion, the responsibility lies with the government, who are not doing enough to help people lose weight and who have allowed food companies to take advantage of the situation. The time has come for politicians to take a stand against the fast-food industry by banning fatty foods and introducing a ‘sugar tax’ to discourage people from buying sugary drinks. Governments could then invest this money into subsidising gyms, building more cycle paths and providing free after-school activities so that people would be encouraged to move more.

To conclude, in my opinion modern lifestyles are the major cause of the obesity problem. Although it is up to the individual to want change, people have become too comfortable and reluctant to try healthier alternatives, which is why the government must take the more severe and drastic measures that are needed.

The Members Academy has a 28-Day Writing Course for both General Training and Academic Test-Takers.

It also includes a 28-Day Course and Challenge for EACH skill – have a quick look at the Writing course here:

How to plan and structure a Task 2 essay.

How to use different types of structures effectively.

How to make your writing more complex – 10 ways and a YouTube 10-minute tutorial.

How to refer to research articles in Task 2.

How to write a Band 9 Essay

Task 2 structures that strengthen your argument.

The ultimate guide to the best Writing Websites for IELTS

Join the Members Academy and get the full Essentials and Advanced Writing Course.

and that’s just the Writing Course!

Click on the images below to find out more about the Members Academy.