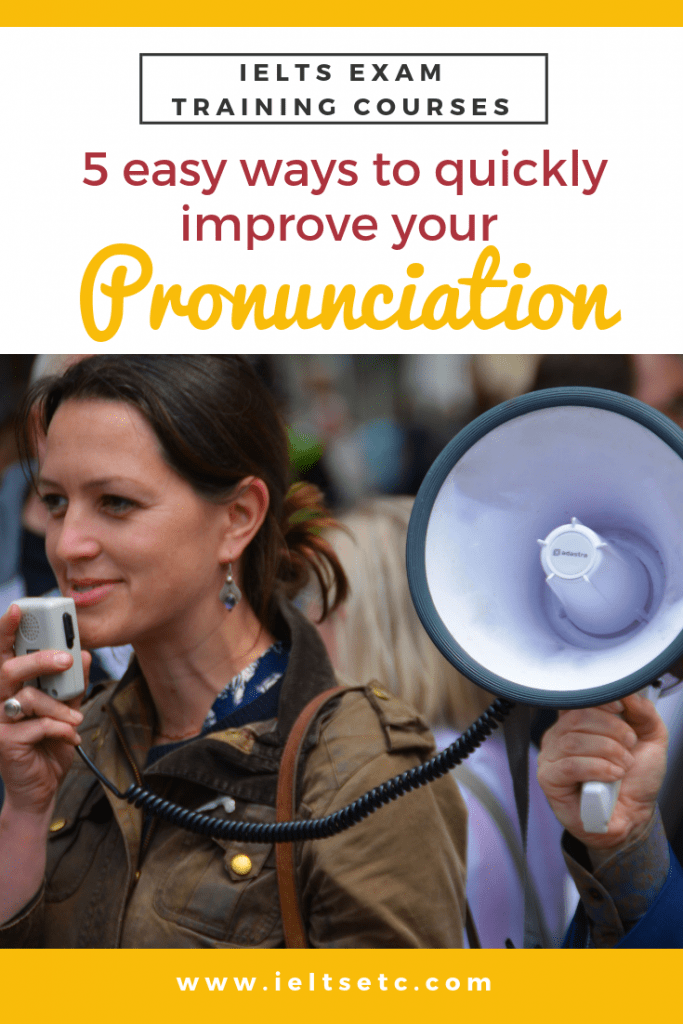 How does the examiner decide on your pronunciation grade?

It’s actually quite difficult for the examiner to decide on whether your Pronunciation score is, for example, a Band 6 or a Band 7.

If you look at the Band Descriptors, they are not very clear at all.

But a higher score for the Pronunciation section could be the difference between a 6.5 and a 7. Which could be the 0.5 that you need!

And what can you do to make a difference?

Look at some of the language from the Band Descriptors below:

Band 6: ‘uses a range of pronunciation features with mixed control‘, ‘can generally be understood’

As you can see, there are no separate descriptors for Band 7 or 5 or 3 and the examiner has to decide on your pronunciation band while at the same time trying to make a decision on

It’s quite a tough job!

So how can you give a more positive general impression that will help the examiner choose a 7 rather than a 6?

You can’t change your pronunciation overnight, but here are a few tips that will help you impress the examiner so they choose the higher score.

Before you start, listen to the first line of my Part 2 Topic about an advertisement:

When you learn English grammar, you usually learn the full, written forms e.g. ‘I would like a cup of coffee‘.

But this sounds very unnatural when you’re speaking.

Try to practice your first line in the Speaking Test Part 2 (long turn) so that you sound fast and fluent e.g.

Don’t be afraid to say ‘I’m gonna tell you’ or ‘I wanna tell you’ if you feel confident using this fast and natural way of speaking.

Some people say that this is too ‘informal’ for an IELTS Exam. They’re wrong – it makes you sound fluent, relaxed and natural.

Words with more than 2 syllables have at least one stressed syllable e.g.

This makes the other syllables weak/unstressed.

So if you listen to my sentence, you don’t hear AD-VERT, you hear ‘ADvuh’ and I even drop the final ‘t’!

This is especially important in words which end in ‘er’ e.g. doctor.

This weak sound is the schwa /ə/, and it is the most important sound in the English language. You need to learn how it works.

This quick lesson on my YouTube channel gives you more information about the schwa and word stress.

Not every word in a sentence is important. In my example above, the important words are:

I’m going to TELL you about an ADVERT I SAW last WEEK.

If you stress these key words in bold, the other words become ‘weak’ and you can say them very quickly.

This also affects your intonation, as your voice gets louder and stronger on the key words.

You want to sound interesting and engaging, so the more you use your voice on the key words, the better you sound (don’t force it too much though!).

Listen to my 2-minute podcasts and try to copy my intonation.

As we saw above, you don’t need to pronounce the ‘r’ at the end of words like ‘doctor‘ or in other words where the ‘r’ follows a vowel e.g. car, learn, where, for.

In fast, connected speech we ‘lose’ lots of sounds, especially at the end of words.

So in my sentence when I said ‘last week’ it sounded more like ‘lass week’ and this is the same with sentences like ‘I used to smoke’ which comes out more like ‘I usetuh smoke’ because it’s so difficult to say ‘d’ and ‘t’ together.

Have you ever tried using a dictation app? When I make my videos with transcripts, I have to edit them carefully because the technology does not hear the individual words and cannot cope with fast, connected speech – it sounds completely different to the written version!

My 30-Day Advent Adventure on Instagram and Facebook helps you see what happens to sounds in connected speech. Here’s just one example of what happens when ‘n’ and ‘d’ come together:

5. Check which sounds are difficult for you

How do YOU pronounce ‘th’? #pronunciation #englishlearners #ieltsspeaking #learnenglish #studyenglish

This usually depends on your first language. It really doesn’t matter if you have an accent (I have a strong Welsh accent, as you can hear in my podcasts!).

But there may be some sounds that make understanding difficult for the listener.

Try and find out which sounds these are for you.

One of the most common ones is ‘th’ e.g. ‘I think ‘- you HAVE to put your tongue between your teeth to make this sound!

But a lot of people say ‘I fink’ (teeth on lips!) or ‘I sink’ (teeth together, no tongue!). If your ‘I’m thinking’ sounds more like ‘I’m sinking’ this could cause some confusion!

What to do next

It’s impossible to change your pronunciation overnight – and why would you want to? Different accents make the world a far more interesting place and are part of your character and your charm.

But if you think it is something that needs work, I have a pronunciation course in the Members Academy which takes you through all of the features of pronunciation that you can work on.

Get all my Speaking Study Links here.

NB I’m putting this here so I don’t lose it!

Go through the whole Pronunciation Challenge (28 Days) on Instagram. Here’s one example: