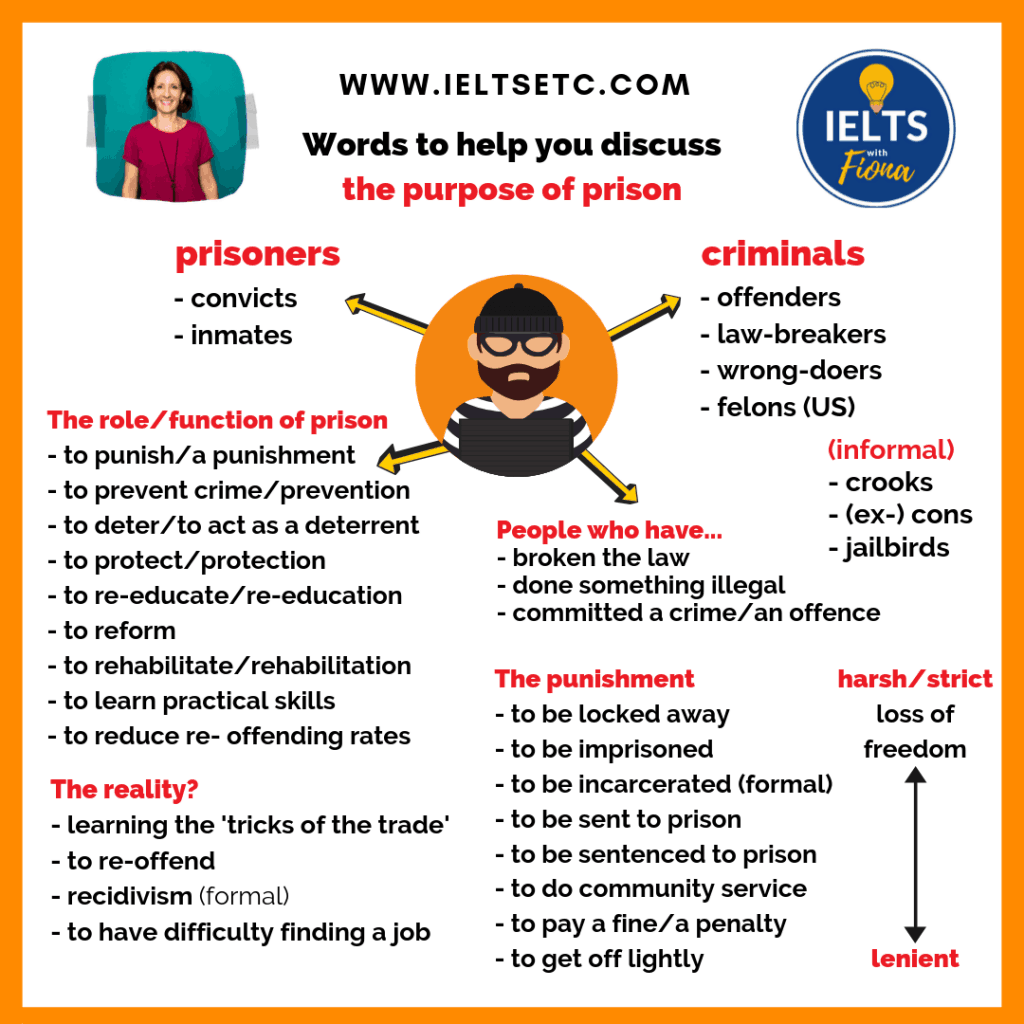 How to structure Task 2

A lot of IELTS tutors give students a basic ‘structure’ to follow for IELTS Task 2.

This is great. I totally believe in structures.

But when examiners mark 100 essays a day, seeing the same old formulaic, mechanical structure can get a bit boring.

I found this essay in a very old Cambridge First coursebook and it breaks the IELTS Task 2 rules in many ways.

It’s still marvellous and a Band 9.

What do you think is so good about it?

‘Prisons are an expensive way of making bad people worse’

To what extent do you agree or disagree?

There are several generally accepted beliefs about prison. Firstly, that prison is a social defence against anti-social people. In short, it keeps us safe. Secondly that prison punishes wrongdoers through their loss of freedom. Thirdly that it teaches convicts the error of their ways, so that when they are released, they can enter back into daily life as law-abiding citizens.

However, there is growing evidence that prison is not always the best solution to the problems of crime that we face. Several scientific studies have shown that prison is not nearly as beneficial to society as we might imagine. There are several explanations for this.

The terrible conditions in most prisons mean that criminals rarely receive a positive education. Rather, they spend their time inside with other prisoners who teach them the tricks of their trade. Also, when they are released, it is very difficult for them to find a job, so they often feel that they have no choice but to reoffend. It’s the only thing they know. So the truth is that they are more likely to commit crimes again when they are released than if they hadn’t been sent to prison in the first place.

As a society, we have to pay attention to the results of these findings. In practice, we may be a lot safer if we give criminals the ability to gain the practical skills they need to get a job and live successful, productive lives, rather than just locking them away. There is little proof that prison works. Perhaps now is the time for us to take important decisions regarding our system of punishment. At the very least we need to give it more thought. It could be a matter of life and death.

Essay adapted from an old First Certificate book about Use of English.

Watch my video about CRIME here

This essay is Band 9 because…

Watch the video version of the essay here:

The topic of CRIME is included in my 28-Day Vocabulary Course (Day 14).

Each Unit of the course includes at least one

Why don’t you try out the Quizlet from this Unit? (have a play around, try out the different Study Modes, change the Options to suit your learning style e.g. with/without audio).

Join the Members Academy and get the full Essentials and Advanced Writing Course:

I don't have enough words to thank you. I was stuck in writing with 6.5 and with just 2 weeks...

I don't have enough words to thank you. I was stuck in writing with 6.5 and with just 2 weeks of preparation from your notes I scored 7.5.
https://ieltsetc.com/testimonials/sancia/

Fiona is an excellent teacher with passion and kindness to all of her students. She helped me a lot with...

Fiona is an excellent teacher with passion and kindness to all of her students. She helped me a lot with IELTS and I improved my scores significantly in a very short time. I’ve got a very busy life and IELTS Academy was time saving for me that it involves everything about IELTS in one place. Some days I had no spare time for studying and I listened her podcasts when I was driving to work and it also helped me a lot! I strongly recommend this course to all IELTS candidates.
https://ieltsetc.com/testimonials/ipek/

I am very grateful to be part of the Members Academy. As I have a super busy career and family...

I am very grateful to be part of the Members Academy. As I have a super busy career and family life, my study time is very limited. When I first decided to take an IELTS test, I even didn't know where to start. Since I joined the Members Academy where Fiona sent me 28 days planner and where you can find everything you need to learn for IELTS, I have had clear guidelines, study materials and methods to lead me into a high IELTS performance. After studying with Fiona for a while, in the first IELTS test, I got Band 8! Thank you so much for your hard work and your professionalism, Fiona!!!
https://ieltsetc.com/testimonials/lily-s/
5
IELTS with Fiona